A Brief Walkthrough of our Transit Gap Tool

In cities across the U.S., transit has proven to be a prevalent barrier to empowerment and economic prowess. In recent years, CNT has built a method to identify these cases through a clarified lens. We found that in many cities, a surplus of “Transit gaps”, areas where transit service is less than ideal, exist alongside those with greater accessibility. We look to Miami, FL and the spread of transit throughout the city, as a case study.

The orange and red areas on the map are census block groups organized into transit gaps, those demarcated in red showcase larger gaps between current transit service and the transit market, while the orange showcases those smaller. The transit market is driven by people, jobs, and the local urban environment. This includes school-aged children, adults, seniors, individuals in poverty, ranging industries, and transit connectivity. 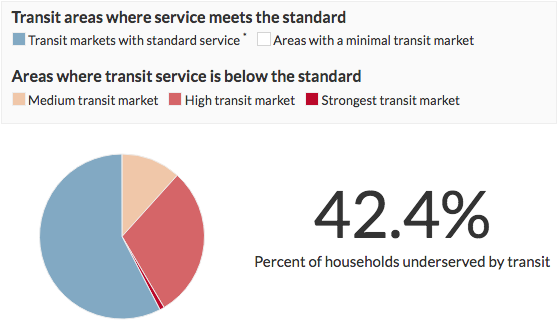 In Miami, 43% of households are underserved by transit, for a range of reasons. Little Havana and Flagami are two low-income neighborhoods that showcase larger gaps. The majority of residents in these two neighborhoods live in renter-occupied housing units, own fewer vehicles (per household) and, as a result, rely on public transportation. The redeveloped neighborhood of Wynwood has pockets with transit gaps, as well. This is primarily a result of increases in economic activity and the population. They are also features that public transportation struggles to accommodate.

AllTransit helps us further explore the relationship between transit gaps and demographic composition, as well. Here, we have mapped the households with income less than $25,000 that live near high frequency transit. The map below mimics the neighborhoods with large transit gaps – Little Havana, Flagami and west Wynwood. Any transit improvements made in these transit gap areas would benefit lower-income residents tremendously. 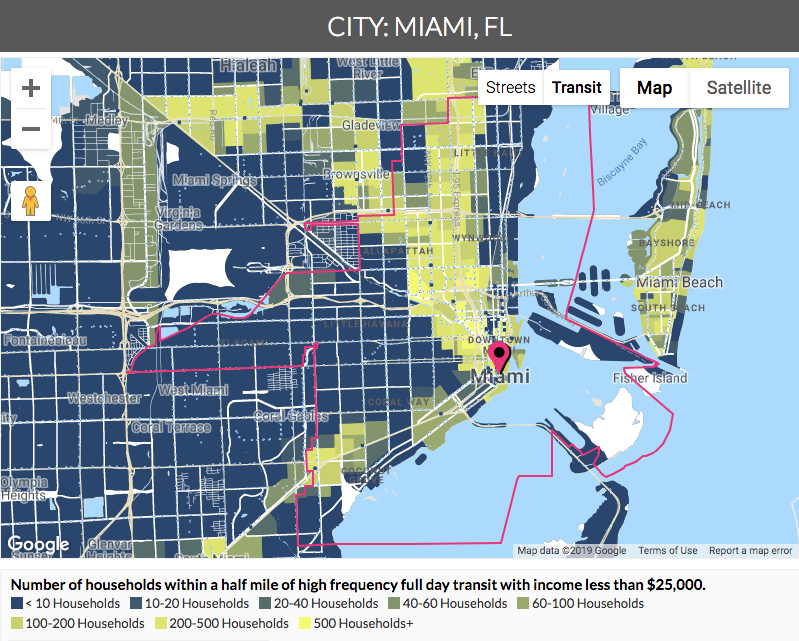 A greater understanding of transit gaps allows community-based organizations to pinpoint specific areas of their neighborhoods (where attention needed) and ultimately, develop a more precise call-to-action. This is where AllTransit serves as a tool of empowerment. Civic leaders are more responsive to these precise recommendations, as they help to both legitimize community leaders, as well as provide a direct linkage to now-diagnosable problems.